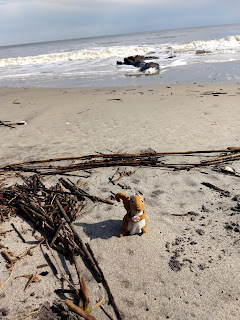 2020 put a stop to travel plans for millions of people — and Tiki.

But over this past year, Tiki has spent a lot of time thinking about his last trip and how much he enjoyed his time in Beaufort, South Carolina. He loved it so much in fact, that he is making plans to return.

The original intent of the trip was to see family, but as we all relaxed in a cute little house we found on Home Away (now VRBO) we started wondering what it would be like to live there.

We would be so close to the ocean and the beaches and best of all, within a day's drive of several cruise ports.

We only had a few days to explore the Beaufort area and made the most of the time we had. It was November so we knew we weren't going swimming, but the weather was still so nice.

We had been through South Carolina before but never for an extended stay. With Beaufort being just over 1,200 miles from home we decided to fly. 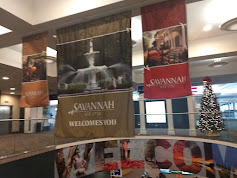 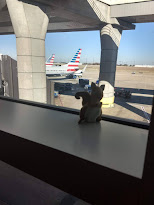 We pulled in at a pretty decent time and checked out our Home-Away home for the week. You can read the reviews, look at all the pictures, even view the home on Google Earth but you never know what it is going to be like until you walk in the door.

We LOVED the Mermaid Cottage 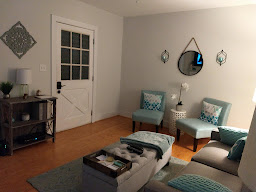 After a quick trip downtown to stock up on some groceries and find the nearest liquor store, it was back to the house.

Over the next few days we started exploring.

Downtown Beaufort streets are lined with cute little shops and if you're into the specialty stores, this would be a great place to spend the afternoon. But for us, being short on time we headed out to Hunting Island.

The drive into Hunting Island was beautiful with its tree-lined roads. The first evening we went out there it was late, the sun was setting and it was drizzling. It made for some really pretty pictures though. The next day when we went back the skies were clear and we could see just how gorgeous the beach was. 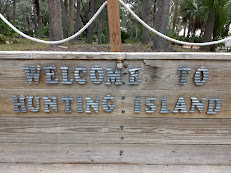 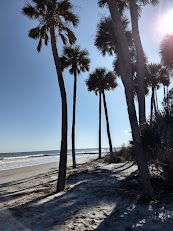 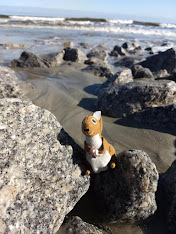 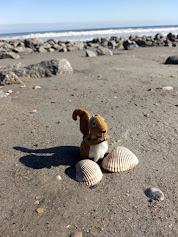 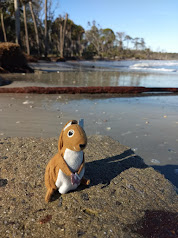 One of the must-see sights at Hunting Island is the Lighthouse. For a pretty nominal fee, you can walk up to the top. It's not a bad climb. Even with a bad knee, I was able to make it without a problem. There are several landings along the way to stop for a moment if you need to.

The views are well worth the climb. You can get out and walk around the top for a 360 look. 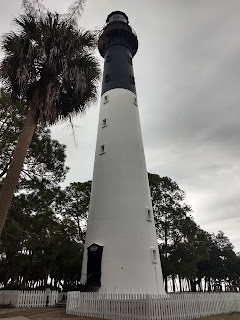 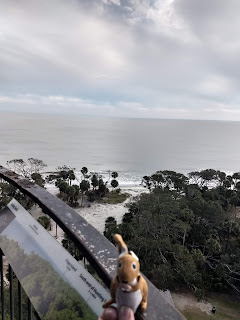 The first lighthouse on Hunting Island was constructed between 1857 and 1859 for a cost of $102,000, which equals about $2 million in today's currency.

Two years after it was built, the Confederates destroyed it so the Union Army would not be able to use it against them.

In 1875 the new lighthouse was completed and put into operation and the lighthouse keeper's family lived on the property. 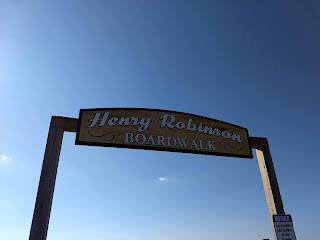 As we drove around and explored the area we came across Robinson Boardwalk, which also had a viewing tower where we watched the dolphins play. 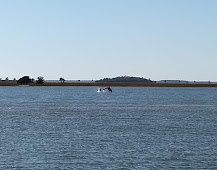 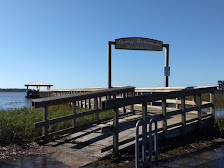 Before we knew it, it was time to head home, but we did take one last quick foray out to the boardwalk before jumping back on a plane to go home to Kansas - many miles from the beaches and ocean.

Popular posts from this blog

Tiki headed east and a little bit north ending up in St. Joseph, Missouri for a weekend. After miles of corn and soybean fields, we finally came to the Missouri River The first order of business was to find what we hoped would be a nice place, which we found on our favorite site for lodging - HomeAway.com.                          We found the Vineyard to be everything it said it was on the HomeAway website. Given the choice between the grand Victorian Bed and Breakfast or the apartment above the Carriage House, Tiki jumped at the chance for the carriage house. Built in 1890, this place has been meticulously renovated. The carriage house was comfortable and perfect for a weekend getaway.               There were two comfortable beds; one in a bedroom, and one situated in the corner of the main room. The couch in the living room was also very comfortable, once Tiki sunk down into it, he didn't want to get up for a while. But what he saw across the room intrigued him -
Read more 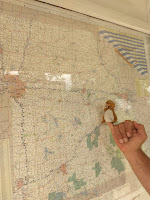 Tiki headed out for his annual trip to North Carolina on Sept. 6, 2019. It was a long drive, but sometimes driving can be more fun than flying - and definitely less expensive. Made it through Missouri, which was the only place we ran into a traffic jam the entire way there and back - surprising.  But no complaints - Tiki would rather sit and wait in traffic than be the cause of the back-up; a quick prayer for those who the ambulance was heading to. After that, it was clear sailing on through Missouri and into Illinois and Indiana. This was a nice memorial at one of the Illinois rest stops. As Tiki travels, he never forgets those who have helped make this country what it is - and those who sacrificed all for America. Finally stopped in Richmond, Kentucky — Tiki was one tired little squirrel.  We won't say much about this hotel because in their defense they are in the middle of a remodel - but seriously ---- who does this?!?!?! The next day was a
Read more

Tiki chose fun when he boarded the Carnival Miracle in Tampa Bay, Florida in May 2019. His trip started a little before boarding because he always arrives at the port city the day before the ship sails. Some people will risk flying on the same day, but we don't. The one time we did, we nearly missed our flight. We heard the announcement that the gate was closing for our flight. We were ushered to the front of an unusually long (at least for Kansas City) line at security. I made it through and was gathering my stuff up when I turn to see Rick stuck behind one person whose stuff was held up in security - they had stopped the line to check her luggage.  The gate was closing and I was begging the lady at the desk to wait - all she could say was "you should have gotten here sooner." Finally, he made it past security and we ran on shoes in our hands and the gate door closed as soon as we were past it - never again do I want to take that risk. So -- We started with a nig
Read more 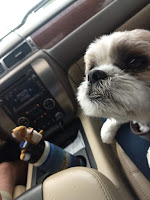 My friend Kristoff and I are hitting the road for the Kansas City Renaissance Festival in Bonner Springs. King Henry VIII and his royal court welcome about 200,000 visitors every year to the festival, which is one of the largest in the country. Pups are welcome but there are some guidelines - check the website for updates and rules. I like making friends where ever I go Ooh la la!! There are 25 stages scattered over 16 acres of land and have an assortment of entertainment including magic shows, pirates and people playing with fire (I'm staying back - don't want to singe my fur)!                          Awe - She's got a little squirrel on her dress YIKES - they sure came up with some creative ways to punish people back then! This exhibit does cost extra to go through, but it is interesting. I loved this part of the festival. A Fairy House competition was part of the activities and dozens of little homes and scenes were creatively made and on
Read more

Island Squirrel
Tiki the Island Squirrel loves to travel. Whether he is off for a weekend getaway in some out of the way little place or hopping on a cruise ship for a week in the Caribbean, he is always on the lookout for a new adventure and new friends.